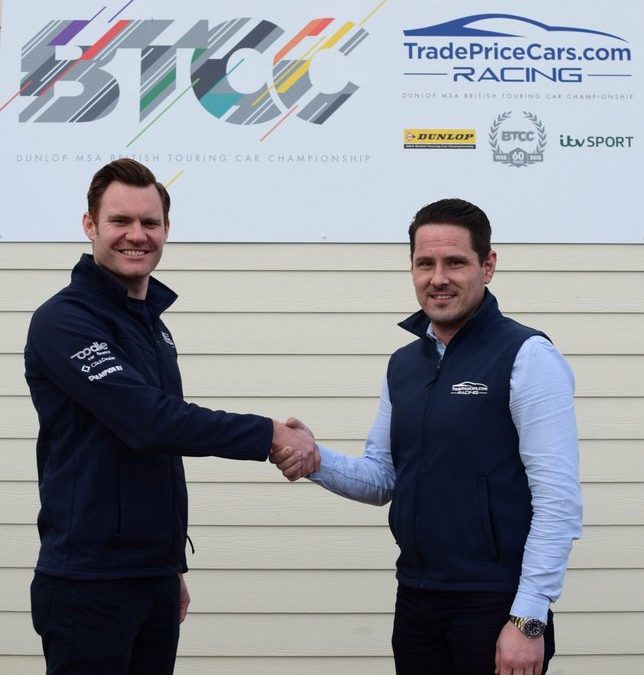 The 35-year-old from Bedford will be making his series debut with the second-year team as part of a new look driver line-up alongside the recently announced Bobby Thompson, but brings a wealth of experience from a hugely successful racing career to date.

A multiple champion in karting, James – known to his fans as Jiggy – carried his success into car racing with a championship victory in BARC Formula Renault but it was a move into the British GT Championship in 2008 that saw his career hit new heights.

Racing alongside Jon Barnes in a Brookspeed-run Dodge Viper, James secured the championship title thanks to an unrivalled tally of four wins – wrapping up the crown with two races of the season still to run.

The same season also saw James take a class win in the Silverstone 24 Hours with the Beechdean Motorsport team before a hiatus from racing that would run through to 2014 when he elected to return to competition in the BMW Compact Cup.

Racing against Trade Price Cars Racing team owner Dan Kirby, James secured second in the standings in 2015 and then went one better twelve months later to lift the championship title.

After a strong guest appearance in the MINI Challenge in 2018, James then worked to put together a full-season programme in the series in 2019, with five wins – and an impressive 13 podiums – allowing the BRDC member to secure another championship title.

That championship success resulted in James securing the chance to sample a BTCC machine for the first time, with an outing in a Ford Focus RS at Snetterton only strengthening his desire to make the step up to the BTCC for the 2020 campaign.

James has now agreed terms on a deal to move into Britain’s premier racing series with Trade Price Cars Racing, which will be looking to add to the silverware it secured on track during an impressive debut campaign.

The award-winning, Essex-based motor dealership took the step into team ownership in 2019 and celebrated a first win in the series at Knockhill, regularly taking the fight to the established order with its ever-improving Audi S3s.

James will make his debut in the Trade Price Cars Racing Audi when the new season kicks off at Donington Park in late March.

James Gornall said: “When I decided to enter the MINI Challenge last season, it was with the aim of learning the skills required to move into British Touring Cars in the future, as I’d never raced in front wheel drive before. The test I did in the Focus as a reward for winning the title only increased my desire to join the grid, as I felt comfortable straightaway and knew that I would be able to do myself justice. I’ve known Dan for a few years from our time racing against each other in the Compact Cup, and we had a chat about his plans for the touring cars with the Audis twelve months ago at the Autosport Show. I’ve kept a keen interest in how things have been going since then, and it’s great that I’m now going to be part of the team for my debut season in the BTCC. As a driver you always want to win races and if you don’t go into a new season feeling you can win, then you won’t do. The team has shown that it can fight for victories and that has to be my target in 2020; to fight for silverware and to challenge for both the Independents’ title and the Jack Sears Trophy. I’m looking forward to working alongside Bobby and think we can have a lot of fun during the season ahead. A huge thanks to Dan and the team for making this deal happen, and I can’t wait to get started.”

Dan Kirby, Trade Price Cars team owner, said: “On the back of our 2019 season, there was a lot of interest in the Audis and a lot of speculation about who would be at the wheel, and I’m really pleased to now welcome James into the team. I’ve raced against him in the past, and you only have to look at the success he has enjoyed in his career to date to see what a talented driver he is. As a newcomer to the series, James is a driver who fans might not be too familiar with. However, I’m confident that they will soon see what James can do when the season gets underway as you don’t become a six-time British champion in a range of disciplines without being a quick driver. James has a winning mentality, and I’m looking forward to seeing him make his mark on the BTCC during his maiden season. With James alongside Bobby, I think we’ve put together an exciting driver pairing that will allow us to build on the success we enjoyed in our first year, and I’m confident that we’ll make a real impression again in 2020.” 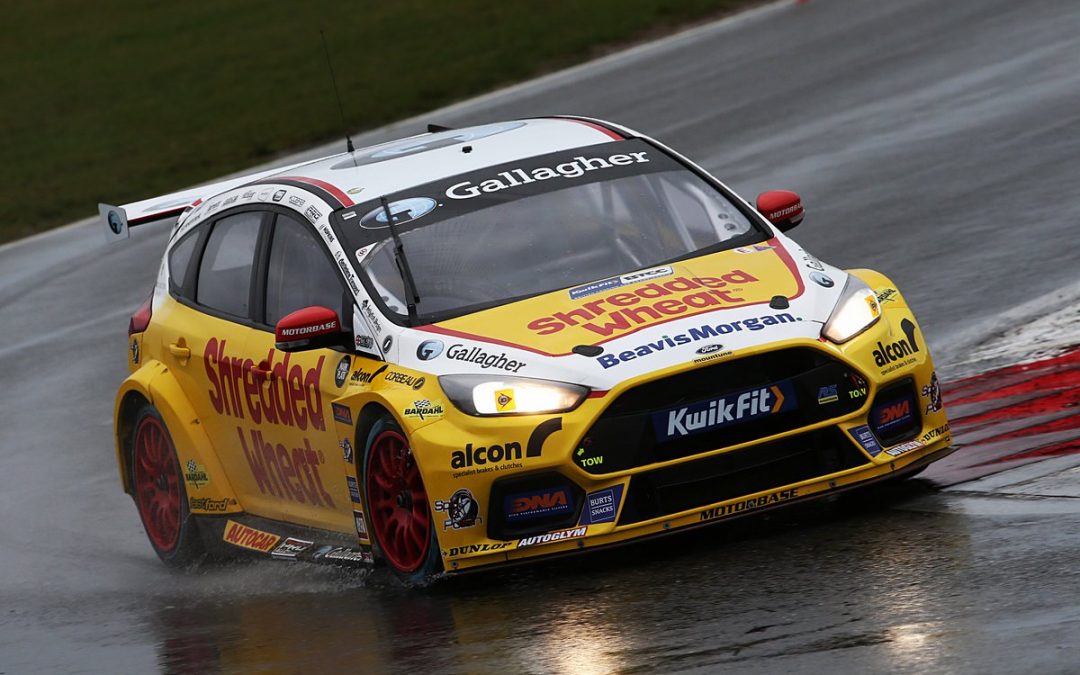 James received many prizes for taking the Mini Challenege JCW Championship in 2019, one of which was a test in the Motorbase Ford Focus RS BTCC car. James said his time in the 265bhp MINI prepared him well for the touring car outing.

James: “Getting to drive a BTCC car is a dream come true,” he said. “Two reasons I chose to race in the MINI CHALLENGE were to learn about racing a front-wheel-drive car, and for the possibility of this test. I quickly felt comfortable in the Focus. The Dunlop tyres, as used in the MINI CHALLENGE, allowed me to push even though the track temperature was very cool. The JCW cars prepare you very well in learning about car control, and they feel quite similar to a BTCC car in their behaviour.” 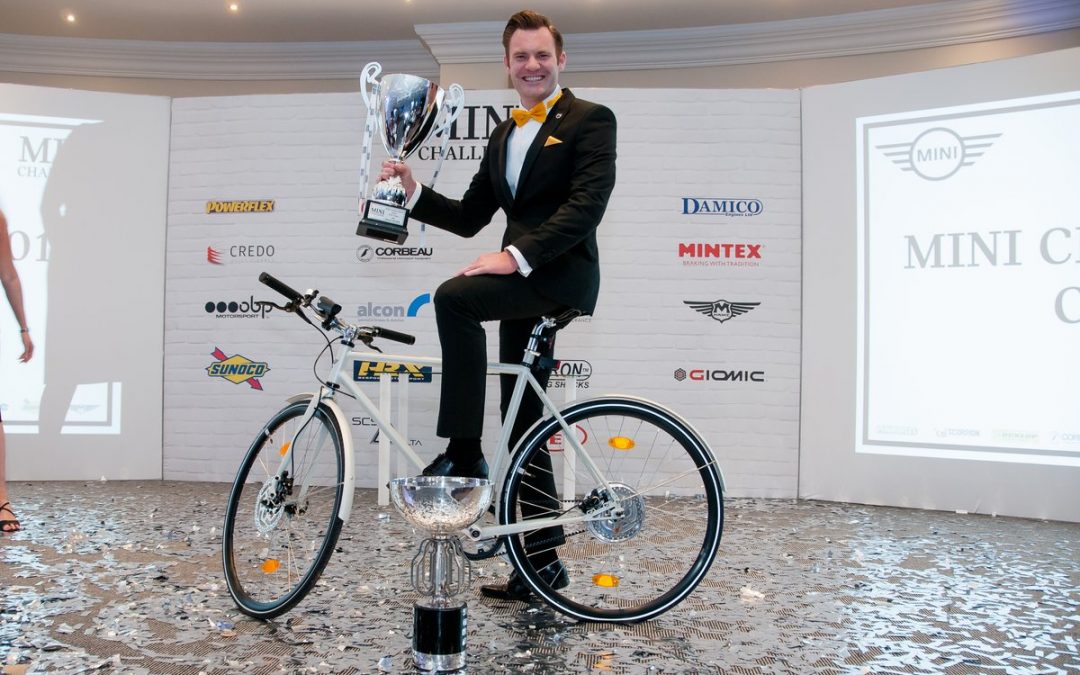 The event took place at Whittlebury Hall, Towcester, close to the Silvestone circuit on Saturday 9th November, where his car was also on display. All class champions and awards were made throughout the evening culminating in the main award of the evening to James… 2019 Mini Challenege JCW Champion in his first full season, doing what he said he would do at the start of the 2019 campaign… win!

James was supported on the evening by his immediate team of Dad Ian, Dave Head, along with his Mum Sandra, partner Laura Head and Azhar and Tara from sponsors Azanti. His other sponsors Sytner were represented by Brand Manager Laura Penny to collect the Dealer Cup, won as sponsor/partner to the winning driver James. James received his magnificent Championship trophy’s, a test in the Motorbase Ford Focus RS BTCC, and a Cooper bike worth over £2500. 2020 beckons with the BTCC firmly in his sights!

He also received an impromptu surprise from  his team/Dad…